George is thought to have been a high ranking officer in the Roman army who was killed in around AD 303. It seems that the Emperor Diocletian (there’s one for Pointless!) had St. George tortured to make him deny his faith in Christ.

The rest of his story is a little bloody, needless to say he didn’t deny his faith. Stories of his strength and courage soon spread throughout Europe.

The best-known is his fight with a dragon. So the story goes, St George killed a dragon on the flat topped Dragon Hill in Uffington, Berkshire, and it is said that no grass grows where the dragon’s blood trickled down!

Whatever he did or didn’t do and whether he even visited our shores, the date of his death (23 April) is remembered as a day of feasting in his honour.

How you prepare the black pudding will depend on where you buy it. It is more likely to be in discs, but if you can get it and cut portions from a larger sausage, it retains its fuller flavour through a softer core.

Peel it and fry it very gently in butter for 10 minutes or so, gently turning it from time to time.

For the pears, peel and core then then slice in half or into thirds according to their size. Add 2 or 3 tbsp of sugar to foaming butter, with a broken cinnamon stick.

Fry the pears in the caramel that forms, adding 3 tbsp of Stokes Mango & Orange Dressing. It should take about 10 minutes to soften the fruit, turning it from time to time. Serve the sweet caramelised pears with the spicy pudding, drizzled with the cooking liquors and enjoy. 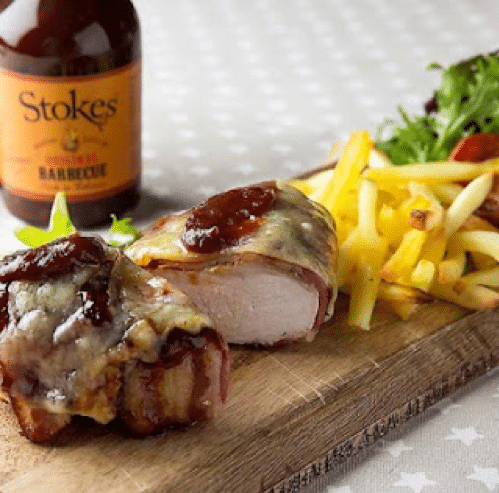 In honour of St George’s prowess as the slayer of dragons, what better than this all round favourite.

First, pre-heat the oven to 200°C/gas mark 6. Tightly wrap a chicken breast (or portion) each with 2 rashers of bacon and put them in the oven for 20 to 25 minutes.

Grate a mature English Cheddar cheese over each with a glug or two of Stokes Original BBQ Sauce and put them back in the oven for 5 minutes until the cheese bubbles.

You can’t really beat a good, traditional roast. But, you might, like us, want to challenge tradition a little with these tasty twists:

Boil new, waxy potatoes for 5 minutes, cool them, then then put them in a bowl with 3 tbsp of Stokes Cider & Horseradish Mustard, 3 tbsp of olive oil and 1 finely diced red onion. Coat the potatoes well and roast them for 30 minutes – yummy.

Balance the tangy mustard crust on the spuds with sweetness in the gravy by adding 2 tbsp of Stokes Redcurrant Jelly as it simmers. For a sharper ‘surprise’ add 2 tsp of Stokes Chilli Jam as well.